Home/ A bit of history / Highlights / Cookies in Comics: from Grandma Duck to Calvin & Hobbes

Cookies in Comics: from Grandma Duck to Calvin & Hobbes

We’ve already talked about food in art on several occasions, and if you missed our 5 extroardinary still lives with biscuits, or our Food & Cinema: 5 films that star cookies, you can always catch up on them

On this new post we’ll see how cookies feature in comics. Even though this can sound like an odd pair, it actually offers us the chance to talk about one of the most beautiful comics, Calvin & Hobbes, and of the one and only cook in the world of comics, Grandma Duck. Let’s do it!

If you’ve never heard of them before, go to check some of their comic strips out now! They’re awesome! To give you an idea, Calvin is a 6-year-old boy, who’s nothing but mischievous, sweet, cute, ironic, and has a great imagination. Hobbes, in fact, is Calvin’s stuffed animal, a tigre, which everyone else sees as indeed a toy, but that to Calvin is the ideal friend that accompanies him in a thousand adventures.

Calvin is an only child and he lives with his parents in a non-specified North American town. He uses his fantasy to become different characters, such as the brave Astronaut Spiff, a dinosaur, and a designer; while his friend Hobbes, although a toy, brings him back to reality.

They were born from the mind of Bill Watterston, and made their debut as a comic strip in the US newspapers in 1985. Since then, they have delighted readers for 10 years, until the author shockingly decided to abandon his characters during the peak of their success in 1995, and retire.

Here’s the turning point: Calvin and cookies! As all kids Calvin loves sweets, especially cookies, and he always tries to come up with new ideas to get to the so desired cookie box. Here are some of our favourite strips on the topic… 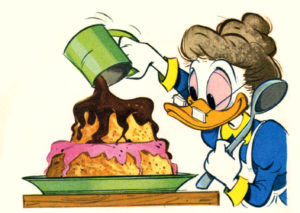 If the topic is comics, though, we’ve got to talk about Grandma Duck! Who doesn’t remember her fragrant cakes that manage to call to action ducks, grandchildren, and Beagle Boys?

Grandma Duck’s cooking skills have always been appreciated by all. So much that in 1971 a cookbook was published in the character’s name: the famous Manual Grandma Duck, which became one of the best sellers in children cooking books. Since then, this book has been adapted, re-edited, and re-published, with a variety of cookie recipes such as, the Dragon’s Biscuits, The Cookies Brigitta, Daisy Duck’s Donuts, and so on.

Below you can find some pictures from a more recent edition from 2002, which has been kept by one of ours here at Ghiott, and is still used sometimes to make delicious (comic) dishes… 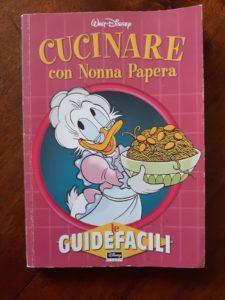 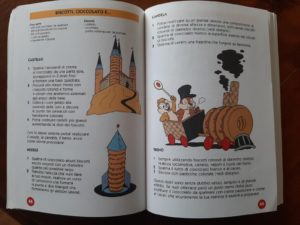 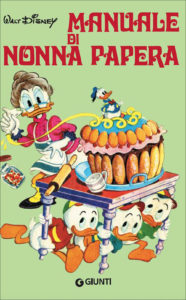 So, what are you waiting for? Read some comics and munch on some cookies!